Home / Anthologies / Just Because / Bellator: An Anthology of Warriors of Space and Time

Bellator: An Anthology of Warriors of Space and Time

Bellator: An Anthology of Warriors of Space and Time August 1, 2020 K. B. Thorne
AnthologiesJust Because
0 Comment 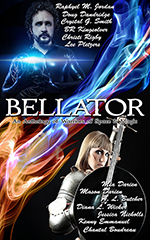 Do you want to read great stories AND help a great charity? Then check out Bellator! All author proceeds go to the Wounded Warrior Project, and with this purchase, you get twelve sci-fi and fantasy stories!

Bellator was originally released today in 2014!

Here’s an one-question interview done when it was released with its twelve amazing authors. 🙂

What’s Worth Fighting For?

In SARAH our hero joins the military, following his ex girlfriend thinking he might have a chance to win her back. He soon realises he can’t and discovers he has a natural talent for a military career. Until she gets kidnapped by terrorists. He’ll go through hades to save her.

So, we can say he fights for love. But it that enough to drive someone to fight? Is love strong enough to make one stand their ground and raise their middle finger to the world? I doubt that.

This answer faces the question of physical fighting. I’m positive other writers in this anthology have different ideas of fighting.

So, back to the original question: what’s worth fighting for?

If someone pushes you, grab that fear and push back twice as hard. You have the right to fight to live your life the way you see fit.

Your dreams are what’s worth fighting for.

Kenny Emmanuel: Family and friends are worth fighting for. There’s nothing more rewarding than seeing their smiles as you share adventures and experiences.

BR Kingsolver: Your life. The lives and well being of your family and friends. The freedom to make your own choices and live your life the way you want to.

Christi Rigby: What’s worth fighting for? Family, and family is not just the people you share with by blood but also those you have taken into your hearts and lives and made them a part of you.

A. L. Butcher: Many things are worth fighting for – love, honour, freedom, truth, justice. These may not hold the same meanings for all and many people think things like money or land, or revenge are worth fighting for. I think this is rarely the case. Money and is worthless if it is gained by lies or hatred, bigotry or the deaths of innocents. Tainted land is just that – tainted. Of course human history tend to be written by the victors and how they interpret that victory is the key. You can’t see truth, or love, or honour, you can’t see freedom or injustice like you can see land, or a heap of money. These intangible ideals make us human, make us free. They also make us civilized beings.

Diana L. Wicker: First I had to wait for that song from Mulan to stop playing through my head.  Then, when all was quiet, only one word came to mind – love.  Friends and family, kith and kin, or that old expression I grew up with, “Who’s your peoples?”  My peoples are my love, and that’s worth fighting for.

Viola Dawn: All forms of love.

Crystal G. Smith: Love is worth fighting for.  I don’t mean just for those that are in a relationship.  I mean all around the world.  It is my opinion that if more people loved a complete stranger, reached out and helped them with wanting nothing in return, just out of the goodness of their hearts, the world would be a better place and we would be seeing a lot less sadness and heartache on the news.  Parents wouldn’t be wondering if their child was coming home.  Spouses wouldn’t be praying endlessly that their husband/wife was safe.  And children wouldn’t be crying at night because they missed their mom or dad.  Our daughter’s wouldn’t be upset because Mommy didn’t get to come to the mother’s day event at school.  Our sons shouldn’t have to be looking towards the stands trying to see if their dad made it to their football game.

The violence in our world saddens me more than anything else.  Women, men, children being murdered and abused when they should be with their families at a bbq, at a park, or even watching a movie at home.  We shouldn’t have to lock up our homes like Fort Knox.  We shouldn’t be worried when we drop our children off at daycare.  It shouldn’t even cross our minds that our children and loved ones are safe.  If everyone loved, it could end a lot of that.

Love can do a lot of things, especially in large numbers.

Chantal Boudreau: Integrity – and by that I mean standing by your values even when others challenge you and the majority disagrees with you.  If famiy is important to you, stand by that, and don’t be swayed by others who think you should be investing time and energy in other things.  If you value equality, then stick up for those who aren’t being treated fairly, be it because they are less fortunate to begin with, they don’t match societal “norms” or they are being stigmatized in some way.  If you think being truthful matters, then wear your honesty on your sleeve despite the fact that others may dislike this.  Be who you are meant to be and do what you think is right.  Don’t change who you are based on the will of others.  Fight the good fight, even if it might be a hard won battle.

Doug Dandridge: What is worth fighting for?  Not the things most people who have never been in battle think.  Not Roman Eagles, the Crowns of Kings, the Star and Stripes, Union Jack, or Tricolor.  Those things are very good for rallying the troops, getting the people behind the effort, of convincing the young men to march off to war.  But they aren’t the things that people fight for.  No, people fight for their homes and families, if they are directly threatened.  Ask the Russian soldiers how hard the Germans fought when the Red Army entered the Fatherland.  Ask the Germans how hard Ivan fought at Stalingrad.  When home and hearth are not threatened, soldiers and sailors fight for their comrades, the men and woman serving beside them.  Not for Generals, nor Politicians, not for medals or flags.  They fight to protect their comrades in arms, as they depend on those others to protect them. Even warriors fighting for a bad cause, or a lost cause, will continue to struggle to their last breath for the people around them.

Mason Darien: There’s a bond of hearts that forms once in an age, a millennium, an eon; to some, it is the fine thread that ties them from the brink of madness, from the brink of death. Cut that thread…and Hell will seem but a fancy fantasy. That thread is always worth fighting for.